Today was the first time we split up in our activities. There was an action in Deir Ballut against the Wall. The army was expected to take action against the demonstrators and some of us were just not up for a repeat of the A-Ram demonstration. It also required a bit of travel and many of us were too weary. As well, Ann’s hearing was to be scheduled, as the money had been handed over to the lawyer, so we wanted there to be a contingency of WCAers close to Jerusalem to attend the hearing at a moment’s notice. So Gail, Ann and Jenny left for Tulkarem and the rest of us stayed back in Biddu.

Three of us traveled to the village of Deir Ballut where the demonstrations against the clearing of the land and The Wall had been continuous.  Concerned about safety, since an international had been shot some months before, we were there as support.

Though almost all of the women who remained slept late, I was up early, on the phone with Huwaida working out the plans for those of us remaining in Biddu. We all met at the restaurant for a late breakfast and then trekked up to the house on the hill. Carol immediately went in for a nap, followed, a little later, by Hedy and Stacey. Others did laundry, read, sat and chatted, and walked around the village. Plans were made for us to be picked up at the restaurant after dinner for a visit to Mohammed’s wife and family.

We arrived at Mohammed’s home at 8pm. Mansour came with us to help translate and because he is so in love with his children. We were all there to give support while Mohammed was in jail. Mansour took on entertaining the children, as we sat around their very beautiful living room to lend visible support to Mohammed’s wife. She is a most beautiful woman and spoke to us in halting English. She was far better at speaking our native language than we hers. She easily began talking to all of us. For me, her most powerful, heart-wrenching words were actually more of a question: “Why should your children and other children in America have more of a right to wake up and go outside and play freely? Why do American mothers have more of a right than we do to send their children out to play without worrying about missiles and tanks? Why do your children have a right to a future, and our children do not?” These were questions that left us silent. Only Carol found her voice to assure her that we believed all children were entitled to play and dream of a future, and that we would go home and tell other Americans what she said and asked us. Carol wanted her to know that we would do all we could to make sure her children had a safe future. 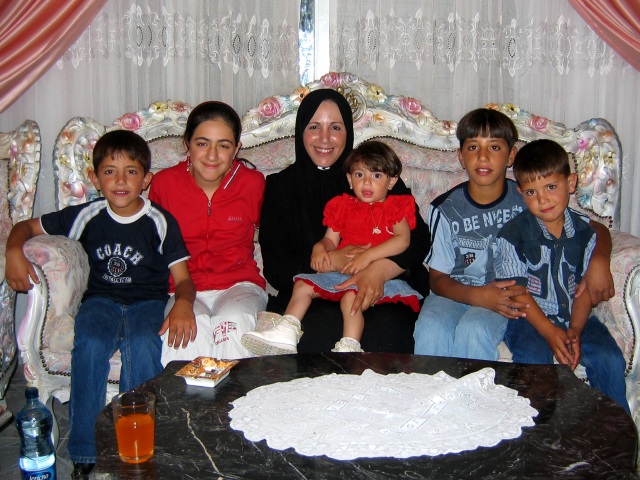 We visited Mohammed’s beautiful family as they awaited his release from jail. While they smiled for the camera, there was a great deal of worry and sadness in this home.

The beautiful children were so happy to see us. One of the younger boys emerged form his bedroom with his hair proudly gelled and his face adorned with the cutest dimples. At one point, the oldest son sat sullenly in an outer room after being told that his sister, not he, would go with the adults to visit their father in jail and await the news of the hearing. He so wanted to take on the role of man of the house. But Aida was afraid to let him go. She felt safer sending her oldest daughter. It was a very emotional meeting and we left this beautiful and brave family with heavy hearts, very concerned for the well-being of Mohammed. We returned to the town center for a bite to eat and then went off to bed.